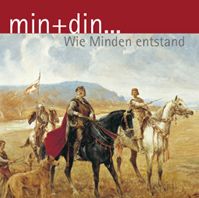 The pagan Saxons were fighting against the conquest and the Christianization of the king of the Franks Charlemagne in the 8th century. On the Wiehen Hills the rival chieftain coverts to Christianity, because of the so called "Quellwunder".
A peace treaty was signed in his castle at the banks of the river Weser and it was then declared "This castle shall from henceforth on be "min" (mine) and "din" (yours)." That's how "Minden" got it's name.